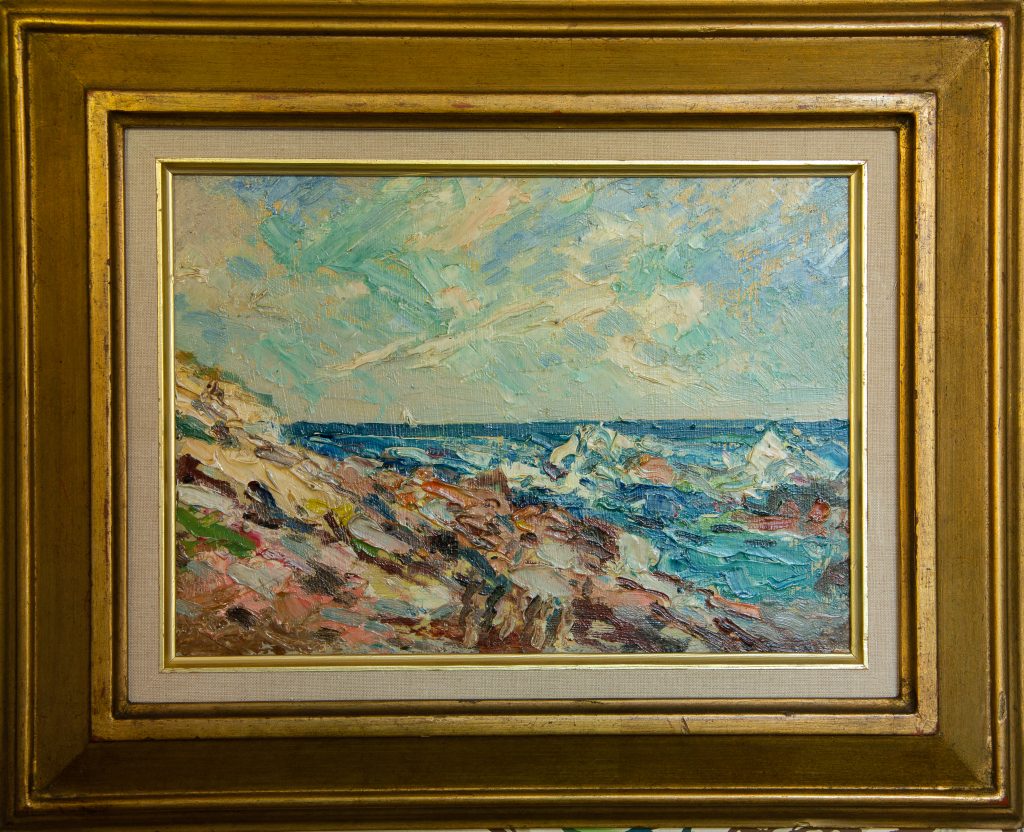 The “Ipswich Painters,” included Edna Baylor, Arthur Wesley Dow, Henry Kenyon, Arthur Kimball, John Mansfield, Carl Nordstrom, Jane Peterson, Francis Richardson, and Theodore Wendel – all of whom chose to live in Ipswich around the end of the 19th century and beginning of the 20th century. Dow was born in Ipswich and called the town his residence throughout his life.

These artists were inspired by the open spaces, the “ancient” houses and old bridges of the town. Many concentrated on the marshes and the rivers and creeks which flow through them. A few painted portraits of people, but most of these artists were looking at nature. These artists congregated here, knew each other, exhibited together, but their painting styles varied.

Most of these painters were proficient in more than one medium including oil, watercolor, pastel, ink, and pencil. Photography was in its infancy and some of these artists (Nordstrom and most notably Dow) experimented in that field.

Edna Ellis Baylor (1882-1966) was born in Hartford, Connecticut. After her parents’ early death she persuaded her guardian uncle to send her to the School at the Museum of Fine Arts on the condition that she win first prize in painting-which she did. She moved to Ipswich in 1930. She chose flowers as her favorite subject throughout her life. Her painting of peonies was on the cover of the French magazine Revue du Vrai et du Beau (September 1927). Her exhibitions included the North Shore Arts Association, the National Academy of Design, and the Pennsylvania Academy of Fine Arts.

Henry Rodman Kenyon (1861-1926) was born in Centerville, Rhode Island and attended Rhode Island School of Design. In the 1880s he studied in Paris at the Academie Julian with both Richardson and Dow, where they developed lifelong friendships. After returning to the United States, he settled in Ipswich in 1901. He was a prolific painter, concentrating on small landscapes in oil during his time in Ipswich. He was a familiar figure tramping through the marshes with paints and easel. His exhibits included the Paris Salon, the National Academy of Design, and the Gallery on the Moors. View a video of the 2016 exhibit of Kenyon’s work here.

Arthur Smith Kimball (1856-1937) was a summer resident of Ipswich. Different from the rest of these painters, Kimball’s primary career was in music. He was a professor of singing at the Conservatory of Music at Oberlin College from 1833-1924 and coauthor of a book of hymns. In the summer he seemed to devote his leisure time to painting and produced airy landscapes of Ipswich’s open spaces.

John Worthington Mansfield (1849-1933) was born in Norwich, Connecticut, and was the oldest of the group of artists known as the Ipswich Painters. He sailed to Europe at age 21 to study art in Germany, Austria, and Italy. He ultimately was drawn to Paris where he studied at atelier Bonnat. He moved to Ipswich in 1887. He was a versatile artist, using oil and watercolors. He was also a skilled etcher and tried his hand at miniatures. He taught at the New England Conservatory of Fine Arts. Mansfield’s exhibitions included the National Academy of Design, the New York Society of Etchers, and the Boston Art Club.

Carl Harold Nordstrom (1876-1965) was born in Chelsea, Massachusetts of Swedish ancestry. From 1904-27, Nordstrom operated a photographic studio in Cambridge. During this period he studied at the School of the Museum of Fine Arts. On forays to the country with his art teachers, Eric Pape and George L. Noyes, Nordstrom came to Ipswich and in 1918, he purchased property on Nabby’s Point along the Ipswich River. He closed his photography studio and opened the Nordstrom Summer Art School on Rocky Neck in Gloucester in 1927. He worked in oils, watercolor, and pencil. He was a much beloved and familiar figure in Ipswich teaching its citizens, his students and friends, to respect and appreciate nature. His exhibitions included Rutgers University, the Boston Art Club, and the Gloucester Society of Artists.

Jane Peterson (Jennie Christine Peterson, 1876-1965) was born in Elgin, Illinois, into humble circumstances. She drew from nature in her childhood and was eager to continue her studies in New York. In 1895 she enrolled at Pratt Institute, where she studied with Dow. After graduating in 1901, she held several teaching positions but ultimately gave up teaching to travel widely through Europe, as well as Turkey and North Africa. She was independent and adventurous. During these years of travel, she studied with Joaquin Sorolla, a Madrid painter, who inspired her to lighten her palette. She also seems to have been influenced by her friend Maurice Prendergast by whose side she often painted. In 1925, the New York Times declared her “one of the foremost women painters in New York.” Her paintings are colorful and joyful, featuring street and harbor scenes and flowers.

Peterson married late in life to a wealthy New York lawyer, M. Bernard Phillip, who was 25 years her senior. Their home in Ipswich, “Rocky Hill,” was where they spent four summers together. She had more than 80 one-woman shows during her lifetime; her work is in the permanent collection of the Pennsylvania Academy of Fine Arts, Wellesley College, and the High Museum.

Francis Henry Richardson (1859-1934) was born in Boston and studied draftsmanship and architecture as a young man. Setting his goals on becoming a serious painter, he studied with William Morris Hunt in Boston. In 1886 Richardson sailed to Paris to continue his art education at the Academie Julian. After winning a prize at the Salon, he returned to the United States permanently in 1900. In 1901, he built a house for his family in Ipswich. In France, many of Richardson’s large Salon paintings featured people in a setting, but in Ipswich he concentrated on landscapes and only a few portraits. He was equally adept at oil, watercolor, and pastels. His exhibitions included the National Academy of Design, Pennsylvania Academy, Detroit Museum of Art, Salamagundi Club and others, receiving the Philadelphia Art Society medal in 1902 and the Boston Art Club Purchase Prize in 1903.

Theodore Wendel (859-1932) was born in Midway, Ohio, and studied painting at Cincinnati’s University School of Design and McMicken School of Art. In 1878, he traveled to Europe and enrolled at the Royal Academy in Munich winning a medal the following year. In Munich he met Frank Duveneck who was to have a lasting influence on Wendel’s painting. By 1885, he was in Paris studying at the Academie Julian where Dow, Kenyon, and Richardson would all study. In 1899, he had returned to the United States and settled in Ipswich.  He exhibited at the Pennsylvania Academy, the Society of American Artists, and others, receiving medals at the Pennsylvania Academy in 1909 and at the San Francisco Panama-Pacific Exposition in 1915.